United by Cardinal and Gold

Whether fostering community, solving big problems, or spreading school spirit, today’s Cyclones are making a name for themselves and Iowa State 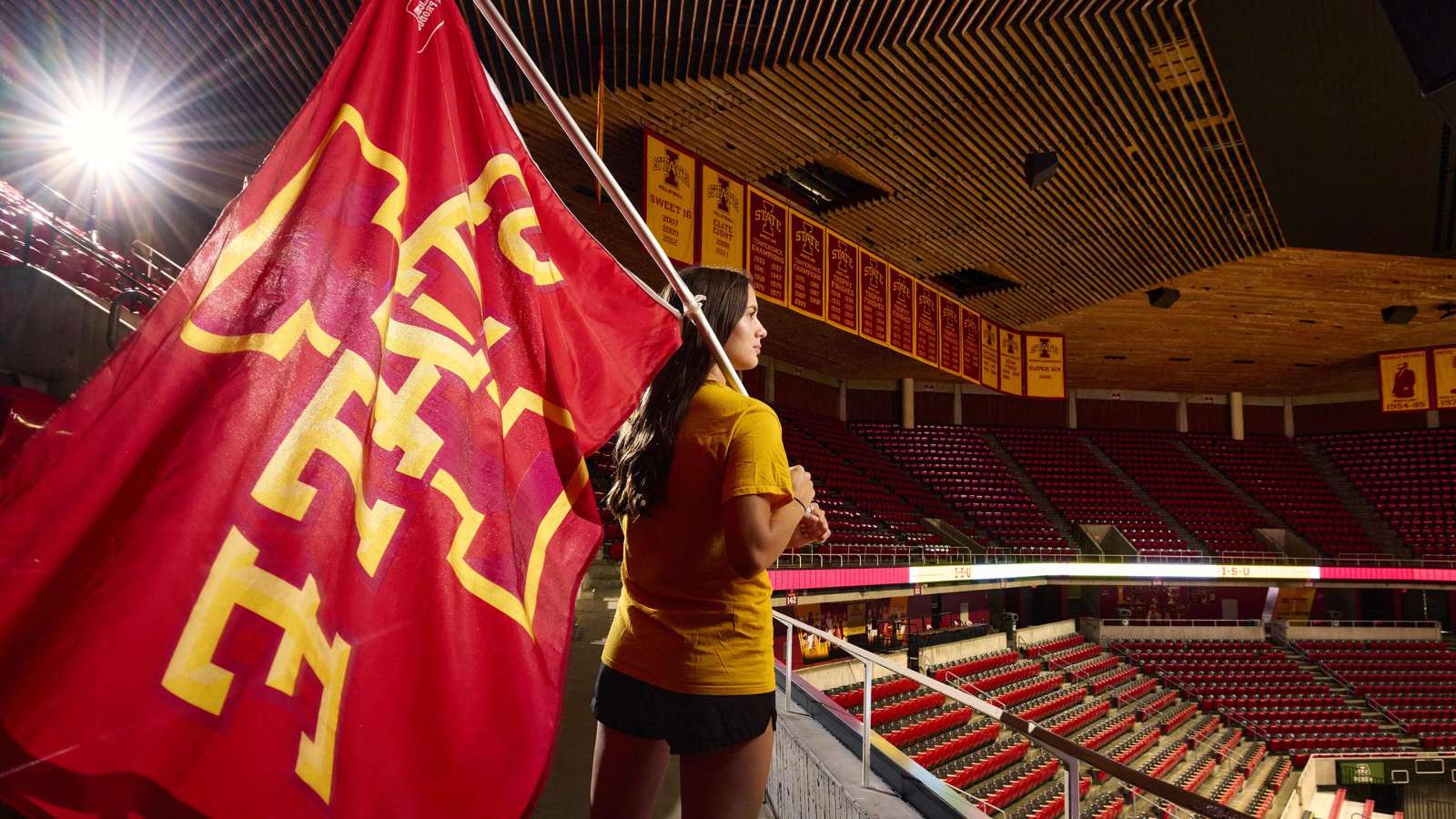 It was December 9, 2021. The crowd was up and ready to clap to the ﬁght song. Erin Lowe, a Cyclone Alley student-leader, took her place on the walkway around the balcony – actually, for her, the track.

The pep band launched, the bass pounding. The crowd kept the beat. The siren wailed.

And may her colors ever ﬂy.

Lowe raised a huge I-State ﬂag, waved it high, and pivoted to run around the coliseum.

Her parents, Iowa State graduates Mark (’88 community and regional planning) and Linda Lowe (’90 accounting) of West Des Moines, recorded the moment — as well as their own cheers.

“Come on, Erin,” yelled her dad. “This is it. You’ve waited your whole life for this, Erin.”

“Wooooo!” shouted her mom as Lowe hit the backstretch.

Right on time, just as the music stopped, Lowe ﬁnished her run with a hop and a few over-the-head maneuvers, the center of Hilton Magic, waving Iowa State’s cardinal and gold.

That ﬂag represents Cyclone athletics. It also represents all Iowa Staters, especially the university’s more than 25,000 undergraduates so full of passion, smarts, resilience, and purpose.

Whether in Hilton Coliseum or around the world, all kinds of students, in their own ways, are waving the university banner. You’ll meet four of them here, each doing special things to keep the Iowa State colors ﬂying.

Lowe ﬁgures a really good lap around Hilton Coliseum is 46 seconds – “if I don’t run into anyone.”

Lowe, a graduate of West Des Moines Valley High School, is from a family of (mostly) Cyclones. She’s been telling people since seventh grade that she’d be an Iowa State ﬂag runner one day.

“It has been a lifelong dream,” she says. One dream accomplished, Lowe is a senior and in the ﬁnal steps of preparing for the next one. She’s an elementary education major and the recipient of a federal TEACH Grant, the Forever Scholarship, and the Pike Family Education Scholarship among other aid. She’s excited to spend the spring semester as a student teacher.

She ﬁgures she’s ready. There’s all that coursework behind her. She’s also spent her entire Iowa State career practicing leadership with the Alumni Association’s Student Alumni Leadership Council (SALC), including its First Year Leadership League. She joined Cyclone Alley her sophomore year and has been a co-director.

That has meant lots of committee meetings, organizing, learning students’ strengths, building relationships, and showing up early to make sure everything is ready for a SALC event or a big game.

“That gave me a way to better connect to the university,” Lowe says. “It has been a once-in-a-lifetime experience to see behind the scenes.”

By stepping up and running with the opportunities, Lowe now knows that successfully waving the ﬂag for Iowa State means she needs to be halfway around Hilton when Cyclone fans hit that line and sing, “Ev’ry yard for I.S.U.”

The paper, published by the scientiﬁc journal Energies in September 2020, describes a study of burning up dried distillers grains, a co-product of ethanol production, and using the resulting bio-char to fuel ethanol plants.

Would that add value to the dried distillers grains? And would that increase the sustainability and proﬁtability of ethanol production?

Straight out of Waterloo (Iowa) West High School, O’Brien joined the University Honors Program and started meeting faculty mentors and learning about research opportunities. He earned the President’s Award for Competitive Excellence and Cardinal Leadership Scholar Award, among others, to help fund his education.

He found his way into the lab of Jacek Koziel, now a professor emeritus of agricultural and biosystems engineering, and went to work. His ﬁrst job?

“It wasn’t what you’d think — it wasn’t cleaning beakers,” says O’Brien, gesturing toward the shelves of glassware in Koziel’s lab on Sukup Hall’s fourth ﬂoor.

It was working with a visiting professor from Poland, who was modeling the energy cycle of ethanol production, all with the idea of ﬁnding efﬁciencies. That led to studying the implications of turning dried distillers grains into something like coal. It also led to O’Brien earning the university’s Undergraduate Research Award.

But will it work?

Well, it “may be a source of new, more valuable revenues and bring new perspectives to the bioethanol industry to be more sustainable and proﬁt able,” O’Brien wrote in the research paper.

What’s it like to see that ﬁrst academic paper published?

“It makes things feel more real. You do all the work, all the analyses, the reviewing, and it culminates in a ﬁnal product. It’s published and it’s out there.”

“BAM!” shouted the event poster showing comic-style drawings of a singer in the foreground and red paint pouring from a bucket in the back-ground. “Black Art Mecca.”

The poster announced “Volume 2” of a Des Moines summer event designed to showcase and inspire Black youth. Like the ﬁrst event in 2021, this was a mecca featuring Black visual artists, performers, vendors, and food trucks that attracted 500-plus people.

Helping plan and run the show was Kaleb Nichols, a junior working on a bachelor of liberal studies degree with minors in African and African American studies and sociology. The event was part of a budding business, AKYN (a play on akin — to be related by blood), that Nichols started with a friend from his days at Des Moines’ Hoover High School.

“We want to create different pro grams for Black youth in Des Moines and beyond — and one of our biggest passions is art,” says Nichols.

The son of Cherrisa and Markeith Nichols is quick with answers and yeah, “BAM!,” he brings energy with him.

He’s at Iowa State with the support of his family, scholarships including the Lois Dale Scholarship, Multicultural Vision Program, a federal Pell Grant, and programs including TRIO (outreach and support for income-eligible and ﬁrst-generation Americans).

“I wanted to be hands-on,” Nichols says. So, he’s building his own major, with a focus on African American studies. “I want to learn about my culture, my people.”

That knowledge will inform his work to plan and promote more music festivals, Juneteenth celebrations, and art meccas.

Nichols says the opportunities at Iowa State are helping him reach his goals. And they’re big ones.

“I want to leave my mark and create everlasting impacts on Black youth.”

“What’s up, y’all,” says Alexandra Abraham, standing on campus in a gray I-State hoody, the white columns of the Enrollment Services Center in the background.

It’s the opening scene of Abraham’s appearance in the Iowa State episode of “The College Tour,” the Amazon Prime television and web series that visits campuses across the country.

“I knew to be successful in college, I needed a university that focused on more than just education,” Abraham continued in the video. “A happy and healthy environment and a strong support system were really important to me.”

Abraham — a sophomore from Novato, California, who’s studying event management, who meets and tours prospective students for the Ofﬁce of Admissions, and who uses the singular “they/them” — is open about how they faced a string of college struggles and the resources that helped.

Abraham found Iowa State thanks to a website that matches students’ preferences with schools. Abraham and mother, Deena Cunningham, made a trip to Ames and took the campus tour Abraham now gives.

“I really fell in love with campus and the people,” Abraham says.

A “Disney kid” who loves fairy tales, they enrolled and made the move to Ames in the fall of 2018, with ambitions of helping people plan their perfect weddings.

But there were roommate problems. There were issues with Greek life. There were struggles with time management. The stresses led to physical illnesses.

“It was overwhelming,” Abraham says. But there was also help at the Thielen Student Health Center and Student Counseling Services. Abraham started therapy and found support from campus health providers to manage their ill nesses. They managed to get through that ﬁrst year and had a strong start to their sophomore year.

Then the stresses of devastating wild ﬁres back home and college life in Ames hit again. Classwork slipped. Getting out of bed was a challenge. Abraham limped to the end of the semester and decided to head home. COVID hit and that led to more time in California, much of it in lockdown.

But these are brighter days. Abraham is back on campus and managing a full course load. ISU Student Counseling Services helped ﬁnd quality, affordable off-campus therapy. Focusing on mental health is paramount as they welcome future Cyclones.

For Abraham, their admissions work is a way to help prospective students be healthy and happy.

“I love encouraging people to take care of themselves and it’s cool I get to do that in my job every day. Picking the right college is deﬁnitely taking care of yourself.”

Take a look at more from these four students, including videos, photos, and even a scientific paper.